Today, there are millions of businesses using hosted services such as Google Apps, Dropbox and SalesForce. Unfortunately, most of these businesses incorrectly assume that the software vendor is actively protecting their data.

While the top Software as a Service (SaaS) application providers do a great job protecting data from loss and catastrophic failure on their end, they do not offer protection from user error, which is the leading cause of data loss. According to the 2013 Aberdeen Group Survey, SaaS Data Loss: The Problem You Didn’t Know You Had, approximately two-thirds of all data loss is attributed to user error, such as accidental deleting or overwriting.

On top of that, they estimated that one out of every three companies using SaaS applications have lost data. Application providers recognize this vulnerability and the top vendors, such as Salesforce, are recommending that users back up their own data.  Add to this the massive growth of SaaS applications for the enterprise, and it’s not surprising that the leading industry analysts are advising IT professionals to adopt cloud-to-cloud backup as a practical option for cloud data protection.

Forrester: “Back Up Your Critical Cloud Data Before It’s Too Late”

Forrester is one of the first major technology and market research companies to lay out the framework for the rapidly growing cloud-to-cloud backup space.  In their latest report, they make the case as to why infrastructure and operations professionals need to be concerned about the potential for SaaS application data losses.  They correctly argue that the risk of data loss is growing in proportion to the explosive growth of SaaS usage. The report predicts that a typical firm will use an average of sixty-six SaaS applications in two years — and most organizations don’t realize that they are at risk for losing critical data on those applications. 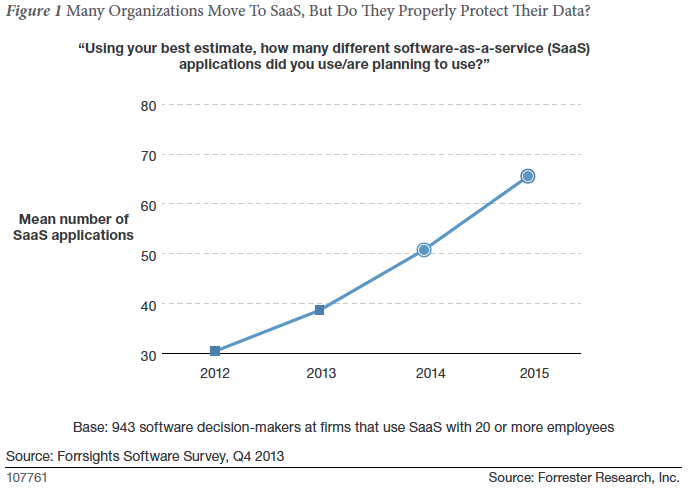 Further, it suggests that firms can mitigate the risk of losing data by working with a cloud-to-cloud backup provider, such as Backupify, to simply and automatically transfer data to another cloud. However, the report fails to distinguish the critical product differences and strategic positioning among the existing cloud backup vendors — information that is essential for any IT professional looking to invest in a scalable cloud backup solution.

Leading the Way In Cloud to Cloud Backup

Backupify, an Avalon Ventures Portfolio company, is the leading provider of cloud-to-cloud backup and restore solutions for SaaS applications including Google Apps, Salesforce, Gmail, and more.  As of today, it has backed up over 1.6 petabytes of data and is on pace to add an additional 100 terabytes of data each month.

What really sets Backupify apart from the competition is its strategy of using its cloud-to-cloud backup platform to move beyond simply backing up data to establish a data management layer.  To this end, it has evolved its market position from its roots of protecting consumers’ social data in Twitter and Facebook, to providing solutions for the SaaS powerhouses of Google Apps and Salesforce, to its newly released developer platform for all SaaS applications.

Currently, other third party cloud-to-cloud services provide backup solutions on an app-by-app basis, thereby creating an array of point solutions populated with silos of data.  Backupify’s Developer Platform, on the other hand, works as a unified data management layer (think of it as a single pane of glass) enabling meta services and ultimately giving users greater control over their own data.  It is is designed to offer a common set of services and premium features (archive, data federation, analytics) to be repurposed across all SaaS applications — and all of this scales on best-of-breed public cloud infrastructure which is open to all developers via APIs.

Backupify estimates that the SaaS application marketplace will grow from $4.4 billion today to over $9 billion in 2017. This is based on the size of the overall SaaS application market, growth in number and type of applications, and expanded adoption by the enterprise.  Data management needs are becoming more complex as the cloud matures, and in a world of fragmented data, backed up data sets became increasingly important. Backupify is well positioned to occupy the data management layer of the evolving cloud stack.