Eyes and Ears Draw Biggest Increases in Investments; Heart Is Strong, but Slipping

Wall Street Journal
By BRIAN GORMLEY
Sept. 15, 2014
What body parts are seeing the most striking rise in venture-capital funding?

The answer in recent years has been the eyes and ears, as investors have poured money into treatments for diseases causing blindness, hearing loss and other diseases affecting an aging population. 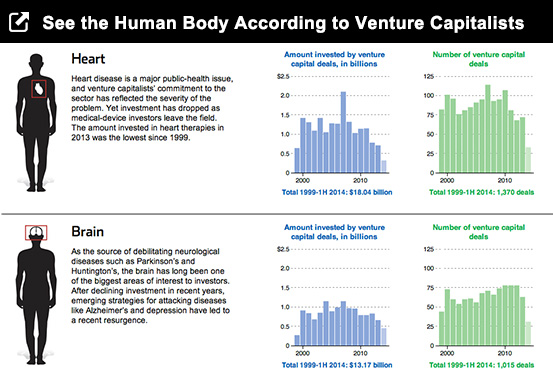 At the same time, venture capital is pulling back from two historical leaders, heart and orthopedic conditions, in part because of difficulties in bringing medical devices for those ailments to market.

These are some of the findings of a Wall Street Journal review of venture-capital investment trends in various parts of the human body, based on data on thousands of financings of startups from 1999 through the first half of 2014 provided by VentureSource, a database owned by Dow Jones & Co.

Since startups are a key source of medical invention, the decisions of venture investors ultimately influence which new therapies reach the public.

Here is a breakdown on where the venture capital is going.

The Eyes. Startups that address eye problems drew $848.9 million last year, making eyes the organ that was most attractive to venture capital in 2013. Venture investors have kept up the pace this year, sinking $442.7 million into vision disorders in the first half. Investment has surged because of rising demand for better treatments and technological advances that are making improvements possible. More than three million Americans age 40 and older are blind or have impaired vision, according to the Centers for Disease Control and Prevention.

A leading cause of blindness in people over 50 is the “wet” form of age-related macular degeneration. In the past decade, the introduction of drugs such as Lucentis, sold by Roche Holding Ltd. and Novartis AG , provided a breakthrough by helping patients maintain or improve their vision.

In more recent years, venture firms have funded startups that could provide patients with additional treatment options using drugs. These startups include such companies as Iconic Therapeutics Inc., which secured $20 million in April to develop a therapy that might improve vision in macular-degeneration patients.

The Ears. A surge in interest in hearing problems led to $76.2 million in investment last year—the highest yearly total since $100.9 million was raised in 2008—followed by $114.4 million in just the first half of 2014. Some 30% of people age 65 to 74 are living with diminished hearing, according to the National Institute on Deafness and Other Communication Disorders.

Venture investors have responded by backing such startups as EarLens Corp., which is working on a hearing device with potential to deliver higher-quality sound than hearing aids available today. The company will seek Food and Drug Administration clearance for the device.

Another company, Otonomy Inc., is trying to develop drugs for conditions like Ménière’s, an inner-ear disease that causes vertigo and other symptoms. Venture capitalist Jay Lichter of Avalon Ventures co-founded Otonomy in 2008 after discovering that he had this condition. Otonomy, which went public in August, aims to raise the profile of this and other ear diseases.

“Hearing and balance disorders are a set of diseases that you don’t see,” Dr. Lichter says.

Those declines are occurring in part because many of the medical-device investors that fueled the cardiovascular surge in the mid-2000s have changed strategy or been unable to raise new investment capital. Medical devices have lost their appeal with many investors because of the long process of securing U.S. regulatory approvals and difficulties companies have experienced securing reimbursement from insurers.

After experiencing regulatory delays in this field, investor David Douglass, a general partner of Delphi Ventures, says he now favors more-established companies, including those that have FDA approval, over startups.

Investors aren’t giving up on treatments for heart disease, and existing drugs for common conditions such as heart failure could be improved upon, says Lou Lange, a partner with Asset Management Ventures.

Spinal and Orthopedic. Similar concerns about regulatory delays have led investors to cool off on orthopedic products as well, such as spinal devices to relieve back pain. Investment in orthopedic and other skeleton-focused products reached $1.14 billion in 2006 but dropped to $479.5 million last year.

Aging contributes to spinal and other orthopedic conditions in the U.S. But after a flood of venture investment in the mid-2000s, the industry is retrenching. The strongest companies are still launching products, but weaker ones are falling off, according to Gary Stevenson, whose firm MB Venture Partners focuses on musculoskeletal diseases. Generally speaking, without an ability to attract capital, companies can’t carry new products through the regulatory process and onto the market.

Mr. Gormley is a reporter in Boston for Dow Jones VentureWire. He can be reached at brian.gormley@wsj.com.