GlaxoSmithKline PLC will partner with venture capitalists from San Diego in an unusual deal worth up to $495 million to start several drug-discovery firms over the next three years.

Under the collaboration, the British drug company will provide financing and technical support to small startups established by Avalon Ventures to explore promising targets for drugs. Glaxo will have to sign off on each startup, and if a technology pans out, Glaxo will have first rights on buying the startup, according to the drug maker and venture-capital firm. 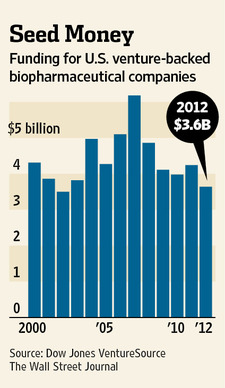 Avalon will contribute up to $30 million in funding, while Glaxo could pay as much as $465 million in seed funding and payments if various development milestones are met. The companies expect the arrangement will involve about 10 companies.

“We are going to immediately own this idea if it is successful, and the level of financial exposure is, frankly, quite small,” said Moncef Slaoui, who heads Glaxo’s research and development.

The partnership marks the latest experiment by a big drug maker looking for new ways to kick-start the difficult search for new medicines, outside of their walls and with minimal risk.

After their own laboratories suffered notable setbacks, big pharmaceutical companies have increasingly turned to outside laboratories for promising new drugs. They have bought experimental medicines from biotech companies and sometimes gobbled up the biotechs whole, though some of those deals have been costly and haven’t worked out as hoped. Last month, Glaxo said it was closing the Cambridge, Mass., offices of Sirtris Pharmaceuticals, bought in 2008 for $720 million, after setbacks including the failure of a drug that contained a reformulated version of resveratrol, a substance found in red wine.

At the same time, Glaxo and other companies have rejiggered their internal laboratories, sometimes cutting jobs and dividing the remaining scientists into smaller units to try to rekindle the innovation that executives believed their large bureaucracies were stifling. Glaxo says its smaller lab groups, established about six years ago, have so far delivered two experimental drugs into midstage human trials and one into late-stage human testing. Glaxo in the coming months plans to analyze the productivity of its internal researchers versus the company’s external collaborators, “to create some healthy level of competition,” Dr. Slaoui said.

The distance between drug makers and venture capitalists—historically arm’s-length until a pharmaceutical company was interested in buying a venture-backed biotech—is also shortening. Last year, Glaxo and Johnson & Johnson JNJ +0.40% teamed up with Index Ventures on a $200 million biotechnology fund, while Merck & Co. backed a $270 million Flagship Ventures fund.

Glaxo’s interest is to tap into the access that venture capitalists like Avalon Ventures enjoy with researchers in San Diego, a premiere hub of biomedical research, Dr. Slaoui said.

For Avalon’s part, Jay Lichter, a managing director who heads its life-sciences investing, says that fundraising and profit-taking have gotten tougher for life-sciences venture funds. “In our world today, financing risk is greater than the technical risk” of turning a promising drug target into a viable drug, Dr. Lichter said.

Depending on the molecule, it can cost $15 million to $50 million to take a promising idea through proof-of-concept testing in humans, Dr. Lichter said. “The odds of raising enough money to get there in today’s market are slim to none,” he said. U.S. venture capitalists invested $3.6 billion in drug startups last year, down from a peak of $6.2 billion in 2007, according to Dow Jones VentureSource.

The companies created as part of the collaboration will have only a handful of employees each, will be housed together in a life-sciences complex beside the Torrey Pines Golf Course’s driving range, and will focus on a single compound each, Dr. Lichter said. The startups could target a wide range of medical conditions such as cancer and infectious diseases, and use technologies ranging from small molecules to recombinant proteins, he said.

The new Glaxo-Avalon collaboration followed from a two-decade relationship between Dr. Lichter and Lon Cardon, a research executive at the British drug maker. The two men had worked together in the early 1990s at a San Diego biotech called Sequana Therapeutics that hunted for genes driving diseases such as diabetes. Dr. Lichter said the seeds for the new partnership were planted when the two ran into each other at an event in San Francisco last summer.

Avalon, founded in 1983, invests in both life-sciences and information-technology companies. Among the firms it helped establish is social-gaming company Zynga Inc. ZNGA +1.24% The biotechs that Avalon helped create include Amira Pharmaceuticals Inc., which Bristol-Myers Squibb Co. BMY +1.86% agreed to buy in 2011 for $325 million upfront. This year, Avalon-backed Afraxis Inc. and RQx Pharmaceuticals Inc. inked deals with Roche Holding AG’s RHHBY -0.98% Genentech unit that could be worth up to $187.5 million and $111 million respectively.

Write to Jonathan D. Rockoff at jonathan.rockoff@wsj.com and Jeanne Whalen at jeanne.whalen@wsj.com